If one ever needs an example of a strong, manly vegan, look no further – Nick Squires will more than fill those shoes. He even rocks a beard that’ll put Samson’s to shame!

How did you end up going vegan?

My wife and I got involved in dog rescue about 10 years ago. We ended up getting a pitbull named Wilbur that had so many characteristics of a cow that I really started wondering why I thought it was okay to eat some animals and rescue others when they really aren’t all that different.

I always had it in the back of my mind but never really faced it.

With some help and encouragement from my amazing wife (who has been vegan since 2004!) I began the process by cutting out all mammals from my diet, since I related to them the most.

As this continued I realized more and more that all animals deserved a better life than the one they are forced into, in order to become 10 minutes of enjoyment for my personal mealtime preferences.

So I stopped eating all meat except for fish. But then one day I stumbled upon the film “Earthlings” and within the first 10 minutes of the film I realized I had to go vegan entirely.

I think that if you’re able to truly empathize with a food animal, to imagine being born into that life and having the capacity to feel love and joy but only ever experiencing pain and suffering every day of your life, you realize that your dietary preferences are not a valid excuse to be the reason for this.

What’s been the hardest/easiest as vegan?

I really feel as the last couple years have been the best possible time to go vegan. The availability of amazing vegan products is everywhere.

There’s a misconception – and one that I used to have – that being on a vegan diet is really restrictive but that’s absolutely not the case. The kind of products that are coming out right now are really exciting and think the future holds big things for veganism in the next couple years.

The only hard thing as a vegan has been the impact on personal and professional relationships. People tend to assign being vegan as your dominant personality trait, even if you’re reluctant to talk about it.

I find that with people I don’t know very well that’s all they want to talk about and in many of those cases they have strong feelings against veganism.

Any tips for someone new to veganism?

For me the transition happened by slowly cutting out one or two animal products at a time. That way I was able to replace these items in my diet without feeling like I was missing anything.

Whenever people ask me how to go vegan I suggest this path because cutting out animal products and staying vegan for life is going to have a much bigger impact than cutting everything out at once without really knowing how to replace it and failing, returning to an omni diet.

When we had our daughter I really took a look at my life and tried to look at everything that had a negative impact on who I was/would be as a father and change it. 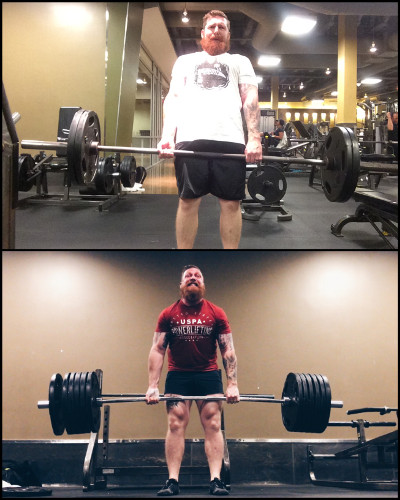 My wife was already going to the gym regularly so I started tagging along. I’ve played hockey my whole life but I’d never really exercised outside of that on a regular basis.

When our friends asked us if we’d like to run a Tough Mudder obstacle race with them, for some reason I said yes. During training for this 13 mile + obstacles I also began strength training.

I was immediately hooked on the powerlifting movements and the idea of going from being very out of shape to pushing my body to its absolute limit as far as strength was involved.

We went to the Fit Expo in LA that same year and walked by as the USPA American Cup was taking place. I knew right then that I wanted to compete in powerlifting, not only for myself but also to show that you can literally do anything on a vegan diet.

I waited until I was semi proud of my total and entered a meet and finished second in my weight class.

The only thing I would change is to have competed sooner even if it meant a lower finish. I learned more that day than I did the previous 2 years in the gym.

As far as my proudest lifts, I would say that the meet i did in april 2017 was my proudest yet – coming off of two second place finishes, I took first in the 220 lbs open raw category and also won the best overall for the first time which was a surprise. 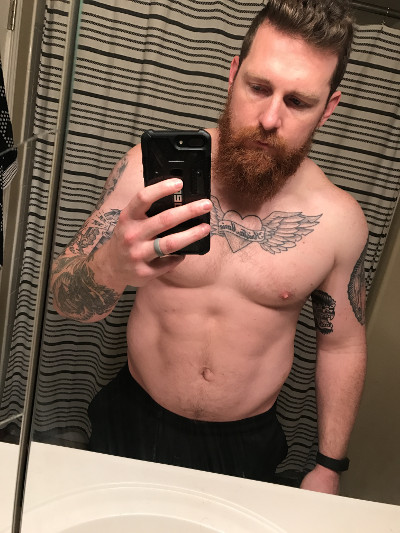 It’s absolutely brutal but I haven’t found a training program that helps me peak for a meet better. I train 4-5 days a week about 60-90 minutes a day with the volume and weight changing a bit each week.

The goal this year is to qualify for and compete at the IPL World Championships in Las Vegas in November. Just getting to worlds has been a goal of mine since my first competition so I’m excited to compete there among some of the powerlifters who I’ve been looking up to since day one.

I’d also like to compete at the American Cup at the LA Fit Expo just because that’s the event that got me interested in powerlifting in the first place and I think it’d be fun to return there as a competitor.

What’s your experience being vegan in the powerlifting world?

When I set out on this path of being a vegan powerlifter I expected it to be a lonely road. While of course I understood that you could be a strength athlete as a vegan I didn’t expect to find many other people who were.

As I got more involved with social media I started finding more and more people who were. Even a group chat of other vegan powerlifters where we talk about music and lifts and food.

The biggest surprise came when I arrived at a USPA open at Rise Above Fitness in Orange County, Ca. During the lifters meeting I noticed a guy wearing a vegan fitness shirt. Just a couple hours later another vegan powerlifter I knew from Instagram arrived to compete as well. It made me so happy to see that kind of representation of vegans at a powerlifting event and a sign, I hope, of things to come.

Do you have any favorite vegan recipes?

I’m really into comfort food. One of the best things about going vegan has been being able to eat all the same comfort food I’m used to, veganized. There’s really nothing I can’t make.

Right now I’ve been having a lot of fun working with the Beyond Meat Beyond Burger. Tons of protein and I can recreate some of my favourite burgers like the Double Western Bacon Cheeseburger, Big Mac, or Double Double without hurting any animals in the process.

What do you eat during a typical day?

It’s a little different on weekends/during the week or when I’m on a bulk during training vs cutting ahead of a weigh-in for an event. I’ll go with the weekend bulk day because that’s more fun.

I track my food intake using Cronometer to make sure that I’m hitting all my nutrients for the day.

During the heaviest part of my training cycles I add a second protein smoothie between breakfast and lunch with banana and cashews and peanut butter to get some extra calories in.

If you want to follow Nick along and see some of his favourite meals as well as his training, lifts, and competition footage, he’s on Instagram as @plantbasedlifters and Twitter as @meatymcsorley.